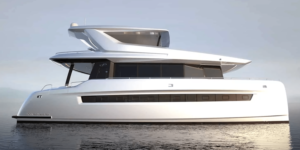 The Dutch company Soel Yachts has presented its new solar-electric yacht Senses 62. The yacht, which is around 19 metres long and ten metres wide, has two electric motors, each of which has a power output of 100 kW or 200 kW, depending on the version.

The battery capacity is 282 kWh, 424 kWh or 564 kWh, depending on the version. With the combination of battery and solar technology, the company claims that the electric catamaran has “transoceanic capabilities”. In other words, the Senses 62 should also be able to cross oceans. However, the Dutch company did not give an exact range.

With 17.6 kWp, the 44 PV panels on the two roof surfaces do not deliver nearly enough energy to cover the power consumption at the cruising speed of eight to ten knots (maximum speed: 12-14 knots). Therefore, depending on the equipment, up to 2,000 litres of diesel are still on board to charge the batteries for the electric drive via the up to 100 kW genset.

The 18.8-metre, or the namesake 62-foot-long catamaran is designed to carry up to twelve people – nine passengers and three crew members. Soel Yachts credits its latest design with a “simple and honest aesthetic”. “The solar electric yacht provides the right balance between minimalistic and modern yet timeless design with a warm and delicate style,” the company’s website says.

To enjoy the quiet drive or the aesthetics, however, a well-filled bank account is a prerequisite: the starting price is 2.7 million euros.