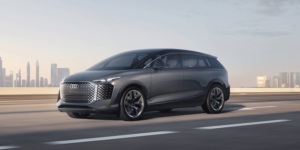 With the Urbansphere Concept, Audi has presented another concept car for an electric model of the future. The interior in particular is designed for “traffic in the megacities of China” – with the largest and most spacious interior of any Audi to date.

According to the Ingolstadt-based company, the focus of the concept was on China, but it is also suitable for “all other conurbations around the globe”. And in those urban regions “where personal space is in particularly short supply”, Audi wants to offer its solvent clientele a correspondingly large personal space on wheels – or use the concept study to sound out how great the demand actually is. For the first time, potential customers in China have also participated in the development process and contributed their own wishes and experiences to the creation (“co-creation”).

“In order to meet the demands of our Chinese customers, Audi’s design studios in Beijing and Ingolstadt worked together closely to jointly develop the Audi urbansphere concept car,” says Audi boss Markus Duesmann.

The Urbansphere Concept can probably best be described as a crossover. It’s not quite a large SUV, but it’s not a van either. With the short front and the A-pillar pulled far forward (to maximise interior space), the concept probably comes closer to a van than any Audi before it. But with a length of 5.51 metres and a width of 2.01 metres, the Urbansphere Concept is not really a contribution to the change in traffic.

However, the car is not intended as a van, but as a modern form of luxury saloon – only with more space upwards, as can be assumed with a height of 1.78 metres. And as such a model, “placed in the automotive upper echelon”, it is not intended to mobilise the masses and solve traffic problems, but to pamper the paying clientele.

When it comes to the drive, the study relies on the PPE. As in the other concept, the Grandsphere Concept, a 120 kWh battery is installed between the axles (wheelbase 3.40 metres). One electric motor each on the front and rear axles provide a system output of 295 kW. The power is regulated according to demand. According to Audi, the front-axle drive can also be completely deactivated to reduce friction and thus energy consumption in rolling mode.

The 800-volt battery can be charged with up to 270 kW, and in ten minutes the battery should have enough power for up to 300 kilometres. Audi states that the charging process from five to 80 percent takes less than 25 minutes. Measured against the calculated range of 750 kilometres according to WLTP, electricity for over 560 kilometres would have flowed into the battery in 25 minutes.

However, the electric drive and charging were more a basis than a focus during development. The large wheelbase and the flat battery were, however, a great help: as Audi states, the study was “consistently designed from the inside out, around its passengers”. This is why the 3.40 metre wheelbase is the car’s most important dimension.

“The interior of the Audi urbansphere is not subject to the conventional maxim of squeezing as many seats, storage compartments, and functional elements as possible into a space limited by the physics of driving. Instead, it prioritizes the occupants’ need to experience ample space as a distinctive comfort factor,” Audi writes. The fact that the seats can be swivelled to enable conversation in the seating group in the Urbansphere Concept, which drives autonomously according to Level 4, is part of good form in studies of this kind. For all information on the relax and entertainment modes, the sound zones of the seats, the built-in water dispenser and the wide “Cinema Screen”, we refer to the detailed Audi press release.

While much of this will remain a concept for now, the overall direction with the customer focus is likely to shape further electric vehicle models from the manufacturer. “To make e-mobility even more attractive, we think about it holistically and from the customer’s needs,” says Duesmann. More than in the past, the product alone is not the decisive factor. Audi is therefore creating a comprehensive ecosystem with car-related services.

In addition to the Grandsphere Concept sedan study mentioned above, Audi also gave a preview of a luxurious e-convertible last year with the Skysphere Concept.

Tesla rumoured to delay volume production in Berlin until 2023

Ford has stopped accepting US orders for the Mustang Mach-E