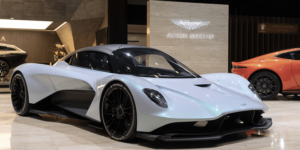 Aston Martin has specified its electrification strategy. The first plug-in hybrid will be the mid-engine supercar Valhalla, which is scheduled for delivery from early 2024. Aston Martin’s first battery-electric vehicle will be launched in 2025.

The manufacturer does not yet provide details in the announcement, but according to an earlier report, it could be the next generation of the front-engined DB11 sports car.

From 2026, all new model series from Aston Martin are to have an electrified drive option – the British manufacturer had already announced this at the beginning of February. In the current announcement, this wording is repeated, however, it was still not specified which degree of electrification is meant: depending on the definition, a 48-volt mild-hybrid system also falls under electrified drives, although the car cannot drive one metre purely electrically with it.

This also leaves open how far-reaching the next announcement is: Aston Martin plans to fully electrify its entire core range of GT sports cars and SUVs by 2030. This wording not only leaves open the back door of unspecified electrification, but also only concerns the “core range”. In other words: if a model is defined as a special series, it could still be sold as a pure combustion engine after 2030.

The company has given its sustainability strategy the name ‘Racing. Green.’ in reference to the traditional ‘British Racing Green’ livery of British racing cars. The race toward a green future will not only affect the vehicles themselves, Aston Martin also sets sustainability targets for production and the CO2 emissions of the supply chains. For example, the company’s own plants are to achieve net-zero emissions by 2030, and supply chain emissions are to be reduced by 30 per cent by then compared to the base year 2020. By 2039, all supply chains are to achieve net-zero emissions. Aston Martin does not set its own climate targets arbitrarily: the company has joined the Science Based Targets Initiative (SBTi).

In addition, Aston Martin aims to fill a quarter of all management positions with women within the next five years. “Whilst embracing electrification, we believe our sustainability ambitions must be broader than just producing emissions-free vehicles, and want to drive sustainability principles across our entire business, with a team representative of society proudly producing responsible products with a reduced environmental impact and making a positive contribution to the communities where we operate,” says Aston Martin CEO Tobias Moers.

The company has already undergone several strategy changes when it comes to electrification. An electric version of the Rapide sedan with 800-volt technology had already been developed almost to production readiness, but never made it to market. Later, the Lagonda brand was to be developed into a pure e-brand. After a consortium around the Canadian billionaire Lawrence Stroll took over the company and appointed the ex-Daimler manager Moers as CEO, the entire model policy, including electric drives, was realigned again.