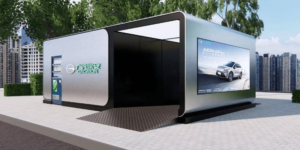 GAC Aion, the e-car offshoot of the Chinese GAC Group, is also entering the battery exchange station business. The first of these stations has now been opened in Guangzhou. At the same time, a price reduction is intended to increase the distribution of the manufacturer’s extremely fast-charging vehicles.

GAC Aion wants to set up 220 battery exchange stations in Guangzhou this year and increase this number to 1,000 by 2025. The proposed battery swapping stations should be able to exchange an electric car battery in 2.5 minutes. The station also offers the function of an automated fast charging process.

So far, Nio has been one of the pioneers in the field of battery exchange, but this year there has been some movement in the market: At CES, CATL presented its own battery swap solution that is supposed to work with vehicles from numerous manufacturers. Geely has also been busy with battery swapping, not only for cars, but also for trucks.

For battery swap stations, Guangzhou-headquartered GAC Aion says it plans to expand swap stations in China and “other overseas cities” in the future. The previously mentioned 1,000 exchange stations are only planned in Guangzhou. The city with a population of over 18 million is located north of Hong Kong. No number of planned stations is mentioned – but since “the model is to be replicated”, it can be assumed that GAC Aion is planning with a high number of exchange stations per city.

GAC Aion said last November that battery-swappable electric car models are not to be launched until 2023. Until then the 220 stations that are to be created by the end of the year will only be utilising the fast-charging port also available on the battery swapping stations. From 2023, the entire model range is to be made battery-swappable based on the new GEP 3.0 platform.

An electric car with a swappable battery has extra flexibility: it can be recharged at a charging station or swap the battery out at a battery swapping station – GAC Aion’s swapping station covers both options. The charging point at the swapping station allows charging with up to 1,000 volts and 480 amperes of current (up to 600 amperes at peak). For vehicles that support exactly this 6C charging, the theoretical peak charging power is 480 kW.

GAC Aion’s vehicles all have quite high ranges, the E-SUV LX Plus comes to over 1,000 kilometres according to NEDC – in real terms it is significantly less, but still at a very high level. In China, charging stations with 300 kW and more (and correspondingly fast-charging vehicles) are very rare, but GAC Aion is also active here: In August, an Aion V with a graphene battery was charged from zero to 80 percent in just eight minutes.

The battery swapping station from GAC Aion features a bolt-on structure that the company says can replace a vehicle’s battery in as little as 2.5 minutes and supports a replacement life of up to 8,000 cycles. According to the Chinese safety standard for battery replacement, which companies such as Nio, BAIC and Geely have collaborated on, it makes a difference whether the battery is bolt-on on or snap-on: Cars with snap-on batteries must allow at least 5,000 battery changes, while those with bolt-on batteries must allow only 1,500 battery changes.

Called the “AION Robot Charger” the charging and swapping robot in development uses flexible motion control, assistant navigation, visual dual-positioning functions. According to Gasgoo, this new system will allow a car to park automatically and have its battery pack charged and swapped without human intervention. The makers claim that this system, enables an electric car’s battery to be exchanged to a fully charged one within 150 seconds.