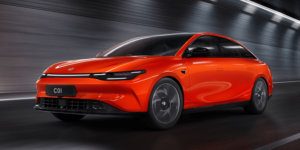 Chinese electric car manufacturer Leapmotor has presented the C01 electric sedan, its recently announced first production model with cell-to-chassis technology. With the premiere, not only the technical specifications but also the first prices were announced.

The C01 is a mid-size sedan that is over five metres long and is offered in four range options between 500 and 717 kilometres according to the Chinese CLTC standard. The special feature, however, is not the range itself, but the way the battery is installed in the vehicle: as previously reported, the C01 uses the so-called cell-to-chassis approach, in which the battery modules are installed directly in the vehicle body. The individual cells are therefore still surrounded by a housing in groups. However, the module housing is no longer built into the battery pack housing.

This should reduce the number of components by 20 per cent and the weight by as much as 15 kilograms. Another important figure: according to Leapmotor, the elimination of the battery pack has increased the installation space in which modules can be placed by 14.5 percent. In other words, more cells fit into the same space.

The largest possible battery configuration in the C01 is 90 kWh. With the 200 kW drive, a maximum of 717 kilometres are possible. With the 400 kW all-wheel-drive version, which uses two of the 85-kilo drive units, the range is still 630 kilometres. This version can accelerate to 100 km/h in 3.7 seconds.

As the manufacturer’s flagship model, the C01 also has some connectivity features to win over Chinese customers. For the three screens, the car uses the Qualcomm Snapdragon 8155 chip. In addition, the car is equipped with facial recognition. The vehicle can be unlocked and started via Face ID, and a total of up to 25 settings can be assigned to the driver via facial recognition. The infotainment is supposed to be compatible with most Android apps. For Apple users, unlocking and locking will also be possible via Siri. For semi-autonomous driving, the C01 is equipped with the “Leapmotor Pilot” system.