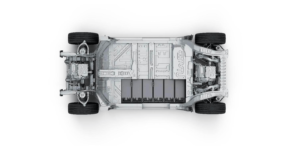 The Chinese electric car manufacturer Leapmotor has announced its first production model with cell-to-chassis technology, in which the battery is integrated into the vehicle body. The Leapmotor C01 electric sedan is scheduled to hit the Chinese market before the end of the second quarter of 2022.

According to the manufacturer, the C01 will offer around 700 kilometres NEDC range with a 90 kWh battery. As Leapmotor states on its homepage, the company’s cell-to-chassis technology (CTC) integrates the battery modules into the vehicle body. The individual cells are thus still surrounded by a housing in groups. However, the module housing is no longer built into the battery pack housing.

In this way, the CTC technology is similar to the so-called cell-to-pack approach (CTP) pursued by CATL and BYD, for example. Here, the module is omitted and the cells are integrated directly into the battery pack. The pack then takes over the control and temperature regulation of the cells directly. With CTC technology, this is controlled by the individual modules. However, the underbody of the C01 is designed to simulate a kind of battery box.

Leapmotor is reluctant to provide detailed information about its solution. On its website, it says that it achieves a higher impact resistance of the battery and also improves the torsional stiffness of the body – but the latter usually also applies to complete battery packs that are integrated into the underbody in one piece.

In March, Leapmotor filed for its Hong Kong IPO – and announced eight new electric cars by 2025 in the IPO prospectus. Currently, the company, founded in 2015, sells the T03 small car, the S01 coupé and the C11 SUV. Even then, the C01 was announced as a five-metre sedan for the current year. However, Leapmotor has still kept quiet about the special feature of the battery.

According to reports, the C01 and the C11 (as a competitor to the MG Marvel R) could also be launched in Europe – but the manufacturer has not yet confirmed this.