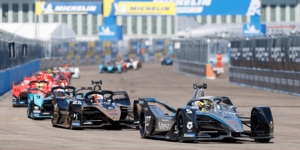 ROKit Venturi Racing’s Edoardo Mortara started the seventh race of the season from pole position on Saturday. The Venturi driver had a comfortable race, as the competitors behind him had to fight many position battles and thus frequently blocked each other. It was not until lap 37 that Mortara went a little on the defensive, tempting DS Techeetah’s Jean-Eric Vergne into a manoeuvre, whereupon Vergne fell 1.5 seconds behind Mortara. The DS driver was unable to make up this time. In the end, Edoardo Mortara took victory in the first race in Berlin. Behind him was Jean-Eric Vergne. Third place went to Mercedes driver Stoffel Vandoorne.

On Sunday, however, another driver was to take the victory: Nyk de Vries (Mercedes-EQ) took an early lead and then drove a commanding race. Overall, the eighth race of the season also went without incident. De Vries finally took the win in the second Berlin race. Venturi driver Edoardo Mortara secured second place on Sunday. Stoffel Vandoorne of Mercedes-EQ was again able to take third place.

In the overall standings, Mercedes driver Stoffel Vandoorne now leads after eight races in the current Formula E season. He currently has 111 points. Edoardo Mortara is currently in second place in the drivers’ standings with 99 points. Jean-Eric Vergne is in third place.

Formula E has been held in Berlin since the first season in 2014/15. Except for the race in the second season, all races took place at the former Berlin-Tempelhof airport. Thanks to a contract extension, Formula E races will also take place in Berlin in the next two years. The area on Tempelhofer Feld offers plenty of space and the best conditions for a large audience, which once again found its way to the race track on this May weekend. So the success story in the capital continues.

In addition, McLaren Racing has now announced its entry into Formula E: For the coming season, McLaren will take over the Mercedes team, which had already decided to withdraw from the series almost a year ago.

Audi to release fully electric A3