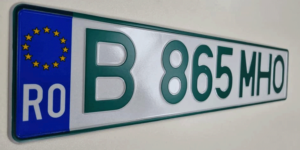 Romania will introduce green number plates for zero-emission cars, the Ministry of Environment announced. The order is for battery and fuel cell electric cars and excludes hybrid vehicles of any form.

The joint order was published in the Official Gazette on 29 April, and the introduction will take place 60 days later, in July. Owners of qualifying zero-emission cars can get the new plates upon request. New registrations will likely receive the green license plates automatically.

“By clearly and visibly identifying clean vehicles in traffic, we create the framework for providing facilities to those who use them: whether we are talking about free parking, access allowed in low-emission areas, or tax cuts, the local authorities, especially those in large urban areas, will have a very useful tool,” local media quote Minister Tánczos Barna.

Romania has, however, so far not introduced EV privileges as the Minister appears to be suggesting here. At the same time, the country is running a generous funding and scrapping scheme to foster the uptake of lower emission vehicles.

Last year, the Romanian Ministry of Environment doubled the ‘Rabla Plus’ budget, which offers grants to purchase electric and hybrid cars, to the equivalent of around 82 million euros. Under the programme, pure electric cars are subsidised at 10,000 euros and plug-in hybrids at 4,500 euros.

According to Environment Minister Tanczos Barna, ‘Rabla Plus’ is a programme “whose ceiling is exhausted every year.”

However, Barna also admits that the share of electric cars in Romania is just one per cent, at least in 2021. “We want as many electric cars as possible on Romania’s roads to reduce pollution,” the minister said at the time.

The green license plate is another measure. It has also been adopted by other countries such as Poland or the UK, and Ukraine. In Romania, they opted for a green font and edge of the plates.