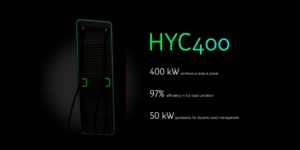 The Italian charging station manufacturer Alpitronic has revealed a sneak-peek at its Hypercharger fast-charging station. The new High Power Charger HYC400 will be eligible for use in Germany’s planned ‘Deutschlandnetz’ (German network).

Alpitronic plans to bring the fast charging station to market by the end of this year. The company has said that the presentation and announcement of technical details are to take place shortly.

So far, only a few core data of the company’s HYC400 have been made public. The charging station is said to provide a charging power of up to 400 kW.

In summer last year, the German government revealed plans for the “Deustchlandnetz” (Germany network) involving over a thousand fast-charging parks nationwide, for which two billion euros are to be made available. Here, the government stipulates that each charging station must have two charging points at which two vehicles can charge at the same time and that a nominal charging power of 200 kW must be available per charging point. Alpitronic now confirms that its new charging station meets these requirements.

In addition, the Italian manufacturer says that the efficiency is to be 97 per cent in the “full load condition”. For dynamic load management, Alpitronic specifies granularity of 50 kW.

At the end of last year, Alpitronic HYC300 Hyperchargers – which can charge one vehicle with up to 300 kW or two vehicles with up to 150 kW each – were put into operation at one of Europe’s largest fast-charging sites to date. The EnBW site at Kamener Kreuz in Germany’s in the Rhine-Ruhr metropolitan region now boasts 26 of these fast chargers. The company’s new charger promises even more power – and in potentially even greater numbers.

Nio drivers get access to Plugsurfing network in Europe