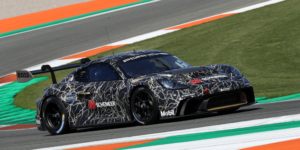 Porsche has started testing the technology components of the Mission R electric racing car study presented at the IAA 2021 with the 718 Cayman GT4 ePerformance as a test vehicle.

At last year’s IAA, the concept study demonstrated the vision of an all-electric GT racing car for customer motorsport of the future. In the meantime, the Mission R’s electric drive concept is “proving its performance on national and international tracks”.

Like the Mission R, the all-wheel-drive race car uses the chassis of the familiar 718 GT4 Clubsport model. The electric powertrain of the 718 Cayman GT4 ePerformance is also based on one permanently excited synchronous machine (PSM) each on the front and rear axles, which can reach up to 800 kW of power at peak.

“The integration of oil cooling has significantly impacted the vehicle concept,” explains Björn Förster, GT4 ePerformance project manager. The oil direct cooling of the electric motors and the battery pack developed by Porsche counteract thermally induced derating. Thanks to 900-volt technology, the battery can be charged from five to 80 per cent SoC in around 15 minutes. The battery cells powering the GT4 e-Performance are from the German company Microvast.

The shapes of the 718 Cayman GT4 ePerformance were created by a team from Porsche Style around the designer Grant Larson. The racing car is 14 centimetres wider than a 718 Cayman GT4 Clubsport and around 6,000 parts were redesigned for the car.

In March, Porsche officially confirmed that it would offer its mid-engine 718 sports car exclusively in all-electric form by the middle of the decade. How much of the technology from the 718 Cayman GT4 e-Performance test vehicle will ultimately end up in the electric production version of the 718 remains to be seen.