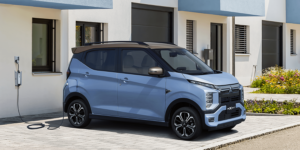 Nissan and Mitsubishi have presented a jointly developed electric small car for the Japanese market. It is marketed by Nissan under the name ‘Sakura’ and by Mitsubishi as ‘eK X EV’ and offers a range of 180 kilometres, according to Japanese WLTP standards.

“We have gathered the electrification technologies that Nissan has developed until now,” said Nissan President and CEO Makoto Uchida. Nissan Executive Vice President Asako Hoshino added: “The all-new Sakura follows the LEAF and Ariya as a mass-market EV. We believe it will be a gamechanger for the Japanese market and will make EVs much more accessible to customers in Japan.”

The Sakura runs on an electric drive system producing 47 kW and 195 Nm of torque. A 20 kWh Lithium-ion battery allows for the previously mentioned up to 180 km range, while the top speed is set at 130 km/h. Charging takes about 8 hours with a “standard” AC charge, and can be done as quickly as 40 minutes for a “warning light to 80 per cent” charge on a fast charger. A V2H reverse charging capability is also included.

The model will be the first mass-production electric mini-vehicle for Nissan. It is scheduled to go on sale in Japan this summer, with prices starting at approximately 1.78 million yen ($13,900 or €13,188), including tax and taking into account the government’s clean energy vehicle subsidy.

Kei-cars are popular in Japan, accounting for about 40% of the car market, and are limited to 3.4 meters in length, 1.48 meters in width and 2.0 meters in height. For gasoline engine mini-vehicles, their maximum engine displacement is set at 660 cc. The reason they are so popular is not limited to their improved parking capacities in large cities, but also their tax rate: parking space is directly taxed in Japan based on how large the vehicle is, and it must be within 800 metres of your home. Kei-cars are not subject to this tax, and benefit from other subsidies, making them a highly popular choice in Japan.