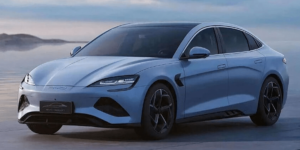 BYD has started pre-selling its Seal electric sedan in China. This means that the prices and technical data of the eagerly awaited electric car, which is intended to compete with the Tesla Model 3, are now known.

The Seal, about which initial information was leaked in February, is the first BYD model with cell-to-body technology (CTB), in which the battery cells are integrated directly into the vehicle body. BYD, like Tesla, describes the CTB technology as a structural component and battery in one, according to a report by CN EV Post. The word sandwich structure by large-format batteries between two plates also falls, with the upper plate also forming the floor of the interior. However, as the German publication Teslamag writes, the battery cells used by BYD are hexagonal. Tesla’s 4680 cells, on the other hand, are round.

The BYD Seal, which is based on the “e-platform 3.0”, can be ordered in two rear-wheel-drive versions with an output of 150 or 230 kW and an all-wheel-drive version with 380 kW. Two battery variants with an energy content of 61.44 and 82.56 kWh are offered. These are chemical storage units with LFP chemistry. The maximum charging power will be 110 or 150 kW, depending on the version. The ranges according to the CLTC are up to 550, 650 or 700 km. A total of four trim levels are available, with two using the rear-wheel-drive version while the others upgrade to a 82.56 kWh battery and an all-wheel-drive variant for the most expensive version, resulting in a range drop of 50 km going from the third to the top version.

The Seal will be built at the BYD plant in Changzhou. The planned annual production capacity is 60,000 units – but this could still change, as BYD registered over 22,000 pre-orders for the Seal within the first six hours alone.

Hyundai to build vehicle factory in the state of Georgia