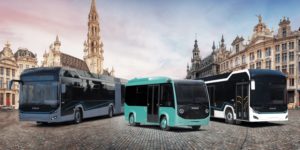 The Turkish bus manufacturer Otokar has presented an articulated bus version of its electric model e-Kent and a new electric midibus called e-Centro. While there is only one battery-powered variant of the e-Centro, the e-Kent is available in three sizes.

The 18.75-metre articulated version of the 12-metre e-Kent electric bus with space for up to 99 passengers is offered with battery capacities of 350, 490 and 560 kWh, according to the Turkish manufacturer. This is to enable public transport operators to choose the appropriate solution depending on the existing charging infrastructure. In addition, the NMC batteries will be available with “fast and slow charging options” – but Otokar does not specify the respective performance.

Instead, in the announcement for the premiere of the vehicle at Busworld Turkey 2022, the manufacturer focuses on features that have nothing to do with the e-drive. For example, the articulated bus is supposed to offer a high degree of manoeuvrability despite its length of just under 19 metres, and passengers are supposed to be able to enter and exit the bus particularly comfortably via four wide, subway-like sliding doors. An all-electric air-conditioning system should enable “comfortable journeys in all seasons”, says Otokar.

While the charging power is not even mentioned on the product page of the e-Kent Articulated, some other technical data can be found there. The maximum drive power is 410 kW, the maximum torque 3,100 Nm. However, a range specification for the three battery options cannot be found there either.

The second electric premiere from Otokar at Busworld Turkey is the e-Centro. The electric midibus is offered with a 110-kWh battery pack consisting of NMC cells. Unlike the e-Kent Articulated, the e-Centro has a range specification: the midibus is supposed to travel up to 200 kilometres on one battery charge. Otokar gives a torque of up to 1,200 Nm.

The manufacturer offers the Midibus in two length variants of six and 6.6 metres. The e-Centro can carry up to 32 passengers. According to the press release, the model is characterised by its low weight and low operating costs – however, neither statement is precisely quantified.