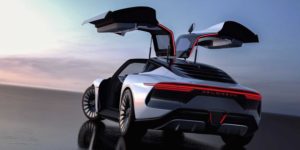 The DeLorean Motor Company has given a first full look at its battery-electric Alpha5 model and published the first key technical data of the sports coupé with gullwing doors. There is also initial information on other models.

For example, the base performance model is said to offer a range of 300 miles (480 kilometres) with at least 100 kWh of battery capacity. Acceleration from 0 to 60 mph (96 km/h) is quoted at 2.99 seconds and top speed at 155 mph (249 km/h). The cW value is 0.23. DeLorean does not currently provide further details on the drive system, such as details on the electric motors, drive power or charging capacity.

The body concept with the gullwing doors is of course inspired by the well-known DeLorean DMC-12, but for the rest of the Alpha5 the designers (from Italdesign) have gone their own way. Instead of the distinctly angular design of the DMC-12, the Alpha5 has modern, curved lines. Headlights and taillights are kept very narrow, and there are some powerful beading and edges in the doors and wings. Only the roof line in the side view is still somewhat reminiscent of the DMC-12 – after all, it is still a coupé with a special door concept.

Inside, there are even two individual seats in the rear, which are also accessible via the large door openings. This is possible thanks to the exterior length of almost five metres. DeLorean has opted for the touchscreen control concept, which is now commonplace.

Production of the DeLorean Alpha5 is scheduled for 2024 in Italy – but only 88 units. DeLorean is planning further electric vehicle models for the future, including a battery-powered saloon and a hydrogen SUV. Further details on the DeLorean Alpha5 will probably be available in August: The company announced that the vehicle is to be publicly exhibited for the first time in Pebble Beach.

Rivian has fired their head of production