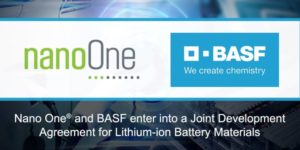 Canadian battery developer Nano One and German chemical company BASF say they have signed a joint development agreement (JDA). The companies plan to co-develop a process with reduced by-products in the production of next-gen cathode materials.

The new process will be based on BASF’s HED family and will use Nano One’s patented One-Pot process and metal direct-to-CAM technologies, Nano One said in a statement. The multi-phase agreement includes a detailed commercialization study for pre-pilot, pilot and up-scaled production.

Nano One points to existing BASF products “well-suited to the evolving requirements of batteries in automotive drivetrains” and the track record of other BASF collaborations. According to Nano One CEO Dan Blondal, there is “a tremendous opportunity to jointly differentiate the production processes and products for a more resilient and sustainable supply chain.”

“Nano One has an advanced technology with the potential to improve the product performance of our high-performance cathode active materials and to simplify the synthesis of battery materials further,” said Heiko Urtel, vice president of global R&D battery materials, BASF. “We are looking forward to building a collaborative working relationship and advancing the business opportunities for our next-generation cathode active materials.”

This is not BASF’s first project around cathode materials with a Canadian connection: the company with headquarters in Ludwigshafen announced in early March that it plans to build a cathode materials plant in the Canadian province of Québec by 2025.

“With new investments in electric vehicles and supporting infrastructure being announced continuously in North America, we are pleased to pursue our own investment in the region,” said Dr Peter Schuhmacher, head of BASF’s Catalysts division at the time.

BASF plans to supply manufacturers in  North America and Mexico from the facility in Canada. The company is also building a plant for cathode materials in Germany, including a recycling plant.

Nano One has also increased its capacity in Canada. The company took over Johnson Matthey’s Canadian business for about 10.25 million Canadian dollars (€7.5 million) in May. This includes an LFP production facility near Montreal with a production capacity of 2,400 tonnes per year.

Stellantis is buying lithium from California