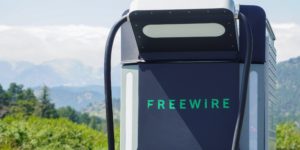 Boosted charging specialist Freewire announced signing a letter of intent with Phillips 66. The rest stop operator says it wants to explore opportunities to deploy FreeWire’s technology within its US fueling station network and other strategic locations.

Phillips 66 operates around 7,000 pit stops in the USA under various brands and intends to expand its range of charging stations. For Freewire, this would be the first significant deal in North America. The company is known for its Boost Charger, which connects to existing infrastructure without construction costs or permit restraints.

That is also one of the reasons why Phillips 66 wants to work with Freewire. “We like battery-enabled chargers for many reasons,” said Lou Burke, Manager of Branded Sales at Phillips 66. “These types of chargers require minimal electrical infrastructure investment, significantly reducing permitting and time to value.” He added they would further reduce operational costs by charging up the battery when power is cheaper but still providing capacity to give customers a rapid charge.

The FreeWire Boost Charger has a 160 kWh battery, delivering up to 200 kW charging power, while the required input power is only about one-eighth of this value – 27 kW, to be precise. Depending on the country and customer, the station has two outputs that can be equipped with CCS1, CCS2 or CHAdeMO cables. With CHAdeMO, the charging power is limited to 100 kW; the 200 kW is only possible with CCS. If two vehicles charge via CCS, the power is divided into 2x 100 kW. The Boost Charger has a 24-inch touchscreen for operation. The station is already CE-certified and also OCPP-compliant.

Arcady Sosinov, FreeWire Founder and CEO, called their battery-integrated charger a “streamlined, shovel-ready solution that many entering the EV charging space are looking for.” On the website, the company claims installation costs would reduce by 20% and operating costs by 70%.

Freewire recently launched its global headquarters in Newark, California. The facility includes manufacturing and R&D capacity and was at the centre of the latest funding round this spring. The company raised $125 million from new and recurring investors such as Black Rock and BP Ventures.

Phillips 66 is also no stranger to Europe and is known under its Jet brand. As reported, Jet plans to build up to 250 hydrogen refuelling stations in Germany, Austria and Denmark by 2026 together with H2 Energy Europe. Whether they will also deploy battery-based HPCs in Europe is open at this stage.