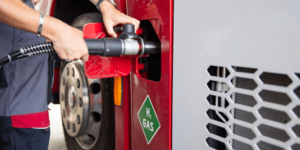 H2 Energy and Phillips 66 want to build up to 250 hydrogen filling stations in Germany, Austria and Denmark by 2026. This is to be made possible by a 50:50 joint venture between the subsidiaries Phillips 66 Limited and H2 Energy Europe.

Phillips 66 is known under its Jet brand in Europe, with more than 1,000 refuelling stations. The joint venture’s future hydrogen refuelling station network is expected to be located at existing Jet stations and new sites on major transportation corridors.

“We consider hydrogen and fuel cell technology an enabler of the energy transition,” says Rolf Huber, founder of H2 Energy. “It buffers excess electricity production and stores and distributes energy that has been produced by renewables.”

The respective subsidiaries plan to develop a distribution network that combines hydrogen supply, refuelling logistics and vehicle demand. In the new partnership, H2 Energy will be responsible for integrating hydrogen production, supply and refuelling technology through its own and affiliated companies. The companies say government support is required to develop the hydrogen refuelling station network.

The two partners have also set a goal of supplying green hydrogen to the refuelling station network, where available. Part of the demand is expected to come from H2 Energy’s investment in Hyundai Hydrogen Mobility – a retail and distribution partner in Europe for Hyundai’s commercially available heavy-duty fuel cell electric truck. Hyundai aims to develop fuel cell variants for all commercial vehicles by 2028.

H2 Energy recently announced the construction of a 1-gigawatt electrolysis plant in Denmark. It is expected to produce up to 90,000 tons of green hydrogen annually from offshore wind power.

Last September, H2 Energy Solutions, a startup founded in August 2021, announced plans to build a Swiss filling station infrastructure to refuel cars and trucks with hydrogen across the country. More recently, H2 Energy unveiled plans to build a 1-gigawatt electrolysis plant off the Danish coast capable of generating up to 90,000 metric tons of green hydrogen from wind energy a year.

JET H2 Energy, however, says it will require governmental funding, where applicable. It also hopes to benefit from close ties with Hyundai Hydrogen Mobility, the exclusive European reseller of the Hyundai Xcient hydrogen fuel cell truck.

Free charging for BMW iX & i4 at Electrify America