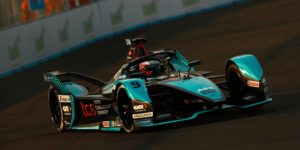 In qualifying, DS driver Vergne had still prevailed over his team-mate Antonio Felix da Costa, and in the heat of Jakarta both black and gold race cars started from the front row. At the start, however, da Costa dropped back to fourth place – which is also where the former Formula E champion finished.

The trio Evans, Vergne and Mortara were in the lead throughout the race. The decisive factor was – once again – the use and precise timing of the attack mode, which had to be activated twice in Jakarta. However, the high temperatures caused a lot of tyre wear – Evans’ rear tyres in particular degraded towards the end of the race, which is why he was only able to cross the finish line in first place, just ahead of Vergne and Mortara. The top three were within one second of each other. All the top drivers had their energy management under control: they crossed the finish line with minimal battery charge.

Important for the championship: Mercedes-EQ driver Stoffel Vandoorne was able to fight his way forward from 7th place in the starting phase. The Belgian finished fifth behind da Costa and was thus able to defend his lead in the drivers’ championship. Vandoorne leads the championship with 121 points after nine races, ahead of Vergne (116), Mortara (114) and Jakarta winner Evans (109). A four-way fight for the title is emerging, as fifth-placed Robin Frijns (Envision) is already a little behind with 81 points.

Vandoorne’s team-mate and last year’s champion Nyck de Vries did not finish in Jakarta after a collision with Porsche driver André Lotterer. As Lotterer received a time penalty from the stewards for the collision, he was classified eleventh outside the points. Maximilian Günther in the Nissan e.dams also failed to score points in 14th place. Of the German drivers, only Lotterer’s team-mate Pascal Wehrlein in the second Porsche 99X Electric was able to score four points in eighth place.

Mercedes-EQ continues to lead the team standings with 186 points. Thanks to Vergne’s podium and fourth place by da Costa, DS-Techeetah has moved a little closer with 170 points. The Mercedes customer team ROKiT Venturi (169 points) follows in third place ahead of Jaguar (139 points) and Porsche (114 points).

Ford aims for direct sales model in the USA