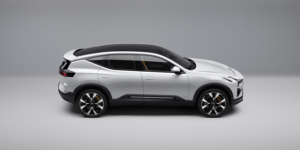 For the first time, Volvo’s electric car brand Polestar has shown an image of its first SUV model, Polestar 3, without camouflage. There’s also a date for the car’s world debut, including the start of orders this October.

However, other information on the new Polestar remains sparse. The company reveals that the Polestar 3 will have a dual-motor drive and a large battery to achieve a WLTP range of over 600 kilometres at launch. However, Polestar had already stated this target range in September 2021. At that time, however, the e-SUV was to receive powertrains with one or two e-motors – so now it is clear that, as with the Polestar 2, the all-wheel-drive variant will be available first. There is no information about the drive power, charging capacity or battery size.

Instead, the Swedish-Chinese carmaker confirms that the Polestar 3 with lidar sensors from Luminar and Nvidia computers will also enable autonomous driving on the highway “over time”.

The now-released rendering of the undisguised vehicle shows the Polestar 3 from the side. The LED headlights appear to be styled after the Precept study (which will go into production as the Polestar 5), so they are narrow LED bands in a T-shape. The front end is high and steep, but there are air outlets on the front hood – so the mighty front end will have air flowing through it in some form. Whether there is a frunk under the front hood is unclear from the picture. In December 2021, Polestar had already published an image of a camouflaged prototype – at that time from diagonally in front.

Further back on the vehicle, the sideline rises sharply in the area of the rear doors, resulting in an extensive D-pillar. A massive roof spoiler dominates the rear. The roofline drops slightly, but not as much as on an SUV coupe. The roof spoiler divides the rear window into two areas – a very flat area at the end of the roof and a steeper part below the roof spoiler. What helps aerodynamics might be less beneficial to rear visibility here, though. It has already been confirmed that the Polestar 3 will not have a third row of seats – but the technically related sister model as the successor to the Volvo XC90 will.

“Polestar 3 is the SUV for the electric age. Our design identity evolves with this high-end large luxury EV, with a strong, individual brand character,” says Thomas Ingenlath, Polestar CEO. “With this car, we bring the ‘sport’ back to the SUV, staying true to our performance roots.”

Production of the Polestar 3 is scheduled to begin in the US and China in early 2023. The manufacturer is not yet providing details on the vehicle’s price. Previously, the Polestar 3 was said to match the level of a Porsche Cayenne.

The Polestar 3 is an important part of the company’s goal to sell 124,000 vehicles worldwide by 2023. The brand increased sales of the Polestar 2 sedan by 125% to 21,200 during the first half of this year, nearly matching the volume of the entire 2021 calendar year