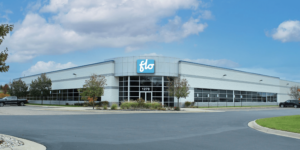 FLO plans to open its first US manufacturing facility in Michigan in late 2022. The factory will help the EV charging business execute its US strategy, says the company. FLO plans to produce more than 250,000 EV chargers by 2028.

FLO expects to create around 730 jobs in Michigan once the facility at Auburn Hills is complete. State Governor Whitmer announced Michigan would receive $110 million over five years in formula funding to build up electric vehicle charging infrastructure and help the state transition into the future of mobility and electrification.

Louis Tremblay, FLO president and CEO, thanked President Biden and Governor Whitmer “for supporting policies that will transform the future of mobility and electrification of vehicles” when announcing the factory today.

“FLO’s presence in Oakland County builds on our tradition of automotive manufacturing with an eye toward our electrified future,” said Governor Whitmer.

It is FLO’s first plant in the United States. Before, the AddEnergie subsidiary had only assembled charging stations in Canada and Michigan. FLO employees are located across North America, from the headquarters in Quebec City to assembly plants in Shawinigan.

The new Auburn Hills factory will also include an advanced testing lab and put FLO on the map of nearby automakers, so the company.

FLO has already scored a major deal with GM to provide charging equipment at GM facilities in the US.

The statement did not disclose how much FLO will invest or whether there has been state funding. A report released by BW Research estimates the FLO plant will generate $134 million in revenue from sales of EV chargers and $76 million in gross state product in the state of Michigan by 2028.

The company is a subsidiary of AddEnergie and has run the FLO network in Canada and the United States for over five years. They claim over 750,000 charging sessions at over 60,000 fast and level 2 EV charging stations deployed at public, commercial and residential locations every month.

Audi Charging Hub to open in Zurich this year