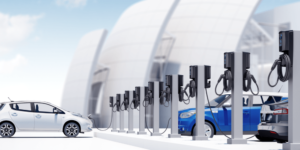 North American charging provider FLO announces it has scored a multi-year deal with General Motors to supply AC and DC fast chargers for installation at GM premises in the United States. The charging stations will allow GM employees to charge their vehicles at the workplace.

“Over the past two years, FLO’s collaboration with GM has been growing steadily and flourishing through different agreements,” said Louis Tremblay, President and CEO of FLO. “This time, we are particularly proud to support GM’s drive towards full electrification by bringing FLO chargers to employee parking lots.”

FLO is one of a few EV networks whose chargers are being installed at GM’s plants and facilities at more than 120 locations across the US. There has been no information on how many chargers each site may receive. FLO says, however, it already installed stations at GM sites in New York City, Austin (TX), Arlington (TX), Flint (MI), and more. So far, the company claims more than 350 FLO chargers have been shipped to GM offices and plants, including ten DC fast chargers, with the rest being AC Level 2 chargers.

General Motors has been pushing various charging initiatives lately. In October last year, the company, for example, rolled out a scheme to install chargers at all GM dealerships in the US using equipment from CTEK as reported.

A few days ago, the company also announced its mobile charging solution called MPG. It relies on GM’s Hydrotec fuel cells to power DC chargers independently of the grid. We reported.