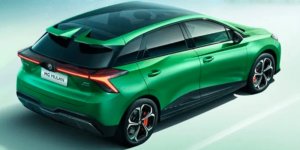 The SAIC subsidiary MG Motor has published the first pictures of its announced competitor for the VW ID.3. The electric compact model was presented in China as MG Mulan and will be launched outside China as MG4.

Technical data will follow the official premiere of the model, which is planned for the fourth quarter of this year. The current pictures are not the first impressions of the MG4: Already in February, MG had shown a short video with a partially covered car for the announcement. Now the complete car can be seen unveiled.

The Mulan has a rather three-dimensionally shaped front, both the front apron around the air intakes and the front bonnet are characterised by several beads. The rather dynamic appearance is complemented by the triangular headlights, which are somewhat reminiscent of the Cupra Born.

In the side view, the design language continues with the beading and light edges. Behind the front seats, the roofline drops slightly and ends in a two-part roof spoiler. On the three published pictures (front, rear and passenger side from diagonally behind) the position of the loading port is not visible. It is either very well integrated into the design or on the left side of the vehicle. In the side view, a large central display can be seen in the interior through the window.

As mentioned, there is no confirmed information on technical data yet. Around the publication of the teaser video in February, the British portal “Autocar” speculated that the MG4 would be technically “largely identical” to the current version of the MG5 Electric. MG will initially offer the estate with a 61.1 kWh NMC battery for a WLTP range of 400 kilometres. The standard version with a 50.3 kWh LFP battery (320 WLTP kilometres) will follow later. Depending on the battery, the drive power is between 115 and 130 kW.

Meanwhile, MG has revealed has other information: According to media reports, the MG Mulan/MG4 is based on the Nebula electric platform of the SAIC Group. This is an EV platform with rear-wheel drive – the MG5 Electric is a front-wheel-drive vehicle. According to AMS, the company also promises acceleration to 100 km/h in under four seconds for the Mulan/MG4 – which again speaks against a technical relationship to the MG5 Electric. So it will probably not remain with the sporty look.