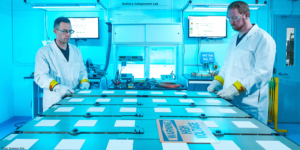 Following last year’s NASA contract with General Motors and Lockheed Martin to develop the next generation of EVs for future lunar missions, there is now an update: both companies have now announced that they plan to produce a series of lunar vehicles for commercial space missions that will use GM’s Ultium battery technology.

The batteries are to be tested in space later this year – with the aim of putting the first vehicle on the moon in 2025.

“The interest around the world is tremendous,” said Derek Hodgins, Lockheed Martin’s director of product strategy and sales for lunar infrastructure services.

Currently, a lunar mobility vehicle is being developed at GM’s testing lab that emulates the moon’s surface and atmosphere, including the change in gravity. GM was previously the major subcontractor that helped Boeing create a similar vehicle used during three Apollo missions on the moon. “This is no dune buggy,” Hodgins said. “These are tools that were not available in the late ’60s.”