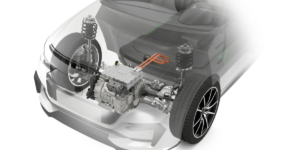 Automotive supplier Schaeffler presented a range of electric drive solutions at the Electric Vehicle Symposium in Oslo. Among them is the 4in1 electric axle drive, which is still under development and which Schaeffler describes as its most comprehensive drive system for electric cars to date.

In addition to the electric motor, power electronics and transmission components, which are often integrated into one component, the 4in1 system also includes thermal management. The high degree of integration is intended to save space and weight, among other things. In addition, the thermal management system is said to be particularly efficient, enabling the electric car to drive further on one battery charge and also to charge faster, according to Schaeffler. Energy consumption is to be reduced by up to 14 per cent through the use of the drive – on the one hand, due to waste heat utilisation, and on the other thanks to a new CO2 heat pump. In addition, the costs are also to be ten per cent lower.

The thermal management of the entire electric drive is known to be very important – since the waste heat of the combustion engine is missing and the drive is very efficient, heat in the electric car is a “scarce and valuable commodity”, as the supplier wrote. The heat is needed, among other things, to heat the interior or for the battery – to optimise range and fast-charging performance. If no available heat can be used, it must be generated with energy from the battery, which increases consumption.

“The thermal management system has a significant influence on the efficiency and comfort of the vehicle,” says Jochen Schröder, Head of Electromobility at Schaeffler. With the 4in1 E-axle, “this creates a highly integrated and compact complete system, which requires significantly less space than non-integrated solutions”.

Since unnecessary hoses and cables are dispensed with, less energy is also lost in the form of heat. “In addition to the compact design, the greatest advantage of the 4in1 system is the optimized interaction of the individual subsystems,” says Schröder. During development, the engineers consider both the thermal behaviour of individual drive components, such as the electric motor or the power electronics, as well as the most efficient and comprehensive thermal management of the entire vehicle – in order, for example, not to dissipate waste heat from the electric motor and power electronics via a radiator, but to use it to heat the interior.

Schröder sees both established carmakers and start-ups as the target group for the highly integrated drive unit. This would shorten the development time and save costs for complex new developments of the entire drive system. “Electric axles are a key element of our electric mobility strategy,” says Matthias Zink, Member of the Executive Board for Automotive Technologies at Schaeffler AG.

In addition to the highly integrated units, Schaeffler also continues to offer its customers individual components or subsystems – including drive axles with two or three subsystems. With its broad portfolio, Schaeffler wants to be able to serve the market from passenger cars to light commercial vehicles.

Also new are electric rigid axles for pickup trucks, so-called Beam E-axles. The special feature of this 3in1 system (electric motor, power electronics, transmission): They are up to two metres wide. Schaeffler will supply them to car manufacturers in the future, especially in North America. According to the supplier, the first orders have already been received.

In the press release, Schaeffler did not provide performance data for the 4in1 electric axle and the Beam axle drive.