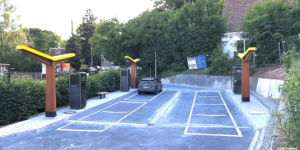 The European fast-charging company Fastned has announced new targets. By the end of 2024, Fastned wants to double the size of its network to at least 400 locations, which will require additional funding of 50 to 75 million euros.

Fastned recently brought the 200th station in Europe online on the A70 in Neudrossenfeld. This week, the expansion continued with two new locations in southern Germany (Fürth and Leutkirch). If the number of locations is to be doubled by the end of 2024, the pace of expansion must remain high. This is exactly what the company expects: to reach a construction pace of 100 locations per year by 2024 that will continue to increase thereafter. By 2030, Fastned wants to build a network of 1,000 sites.

The company has also said that it will expand its network by adding more charging points to its existing locations. The average number of charging columns per location is to increase from four in 2021, to six in 2025, and more than eight in 2030.

Opening up to further markets beyond the six countries in which it operates is also on the agenda for the charging infrastructure company. This will initially involve the neighbouring countries of the existing network. The focus will remain on long-distance charging along motorways, although Fastned will continue to add urban locations to its network.

At the the company’s first capital market day called Charging Day 2022, focus was not only about the expansion targets for hardware, but also financial targets. By 2025, the average annual turnover per location should be at least 400,000 euros. For 2030, the target is one million euros. Not surprisingly, Fastned assumes that its own business model will be highly profitable with the growing spread of electric cars. EBITDA is expected to be positive by 2023 and the operating EBITDA margin to be 40 per cent by 2025 although the operating margin does not include investment costs in new locations.

Other plans include is a kind of café that can be adapted to locations on a modular basis. The pilot location is located at the Brecht charging park between Antwerp and Rotterdam. Fastned sees that the possibility to enjoy a coffee and a sandwich while charging will significantly improve the customer:inside experience. The company sees this as an important step towards the realisation of full-service charging stations. In terms of spacial design, the aim is to make stations available to vehicles other than just electric cars. The company sees that stations should, where possible, be planned so that they can also be approached with a larger turning circle – i.e. by truck, for example.