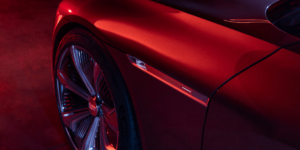 General Motors is investing more than 81 million US dollars in its Global Technical Center in Warren, Michigan, to prepare the campus for the construction of the Cadillac Celestiq.

Like the Lyriq SUV model, Cadillac’s future all-electric flagship sedan is to be built on GM’s Ultium platform. A concept of the Cadillac Celestiq, for which first teaser images have been released, is announced by the company for the end of July.

The Celestiq is to be hand-built in Warren and feature what is expected to be the highest volume of 3D-printed components – more than 100 – of any GM production vehicle. This is expected to include both structural and optical parts, as well as polymer and metal parts.

It is unclear when the production model might arrive. Initially, a show car debut will follow at the end of July. What is clear, however, is that the production model will be anything but affordable. Before that, the already presented Cadillac Lyriq will be on the roads. With the presentation of the electric SUV, the GM brand announced last year that it intended to become an all-electric car brand by the end of this decade.

In addition to production for the Celestiq, GM is investing in a battery cell innovation centre on campus. The facility will be dedicated to the development and production of GM’s next-generation Ultium cells and will be operational by mid-2022. The centre, called the Wallace Battery Cell Innovation Center, will enable GM to accelerate the development of new technologies such as lithium metal, silicon and solid-state batteries – as well as the associated production methods – among other things. In addition, GM wants to bundle the work with its battery cooperation partners at the location.