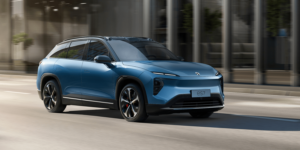 The Chinese electric car manufacturer Nio has presented its new ES7 model. The electric SUV is now available for pre-order in China. Deliveries are scheduled to start on 28 August.

The ES7, announced in February, is based on the new NT2.0 platform. Nio’s current SUV models – the aforementioned ES8, ES6 and the SUV coupe EC6 – are still built on the first generation of the platform. In terms of dimensions, the ES7 reaches a length of 4.91 metres, width of about 1.99 metres and height of 1.72 metres. The drag coefficient of the ES7 is 0.263 in the best case.

As already suspected, the ES7 will be offered with the two known battery sizes (75 and 100 kWh). But there will also be a variant with 150 kWh. According to the Chinese standard, ranges of up to 485 km, 620 km and even up to 850 km with the largest chemical storage are possible. However, Nio does not provide any information on charging times in the press release.

In addition, the ES7 offers a towing capacity of no less than 2,000 kg. There is also supposed to be an unspecified “camping mode”. Electrical devices can be supplied with power via the V2L function.

The interior of the NIO ES7 continues the vision of a “second living room” with sophistication and a human touch, according to Nio. The front cabin adopts the double-layered S-shaped instrument panel. The front seats have heating, ventilation and massage functions. Heated rear seats are standard. The backrests can be electrically adjusted between 23° and 31°.

Pre-orders are already being taken by Nio, as mentioned. Prices start at the equivalent of around 66,900 euros before subsidies for the 75-kWh variant. The ES7 with a 100-kWh battery will be available from around 75,300 euros. For those who opt for battery rental, prices start at 57,000 euros. Prices for the variant with the 150 kWh battery were not mentioned.

Cadillac Celestiq to be built by hand in Warren