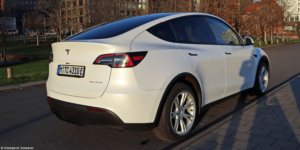 While Giga Berlin is finally churning out Tesla EVs made in Germany, the new cars may not be free to go everywhere. The head of security for Berlin’s police has attempted to issue a ban for any Tesla coming near police stations and headquarters since he considers the cars a threat to data security.

The reasoning lies in the Tesla Sentry mode. Initially (or officially) designed to protect the EV from vandalism or theft by filming the car’s immediate surroundings, the Berlin police consider the function a spy mode. Their officers and third parties as well as police stations as such would be in danger of data breaches and other issues such as privacy, so the internal mailing seen by local media.

Moreover, Tesla not only records but extracts the data to servers in the Netherlands, where only Tesla decides what to do with the data and whether to release it. This, so the police is a threat to data privacy and a matter over which the force presides.

The security chief, therefore, ordered that the Tesla ban “be implemented as an agency-wide measure by all those responsible for their respective police properties.”

Talking of direct responsibilities, it so happens that one of their own could be affected by the ban. Thomas Goldack, who heads Directorate 2 in the west of the city, drives a Tesla. So far, the car can still be seen in his designated parking space, however on police premises. It likely will be down to Goldack to decide, whether to deactivate the Sentry mode or choose another form of transport.

This is particularly true since the Berlin police have since issued an update on Twitter, saying that there has not been a final decision on a general Tesla ban, or in fact any other car capable to surveil its surroundings, on police premises.

Says the police: “A general ban on entry for vehicles with environmental monitoring, such as.
@Tesla does not currently exist on police premises. The authority-wide examination is not yet completed, so yesterday’s internal info is void.”

Chain of command aside, the Berlin police is not alone in their espionage concerns. Only yesterday, China’s Beidaihe district reportedly banned Tesla cars from driving there for at least two months from 1 July. The background is a Communist Party leadership meeting planned to take place there.

At the same time, police have also benefited from Tesla’s Sentry mode at times. After accidents, for example, investigators sometimes logged into Tesla’s European data centre and a car’s internal memory, however, only with a judicial search warrant.

tagesspiegel.de, bz-berlin.de (both in German)

Teslas banned from driving due to espionage concerns