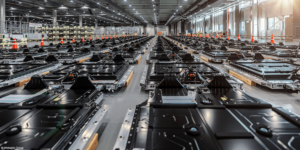 The new site, modelled on Webasto’s battery production in Schierling, Germany, spans 22,000 sqm. The company targets manufacturing 110,000 battery modules a year and plan expanding to a capacity of 160,000 packs by 2025 in South Korea. Webasto has invested around 88 million euros in the location.

Production in Dangjin started this April, now followed the official opening. The company considers the facility “a milestone for developing the electromobility business”. Webasto has been producing and selling roof systems in South Korea since the late 1980s and formed Webasto Korea out of a joint venture in 2019, then integrating e-mobility solutions in the portfolio.

The battery packs Webasto assembles in Korea come in two variants: the long-range version with 68.7 kWh and a basic version with 50.9 kWh capacity. It remains to be seen in which models Hyundai-Kia will install the new packs – there’s been no details on this.

Over in Germany, Webasto announced at The Battery Show in Stuttgart that it had received its first order from an unnamed German manufacturer earlier this year. To be able to serve this order, an additional plant will be built in Europe, Webasto says. However, the company has yet to name a site.

Taken together, the two most recent battery orders alone have a volume over a billion euros. For Webasto, this marks a turning point: incoming orders in the e-mobility segment in the first three months of 2022 will exceed those of the established core business with roofs and heating and cooling solutions for the first time.

In addition to battery assembly in South Korea, the supplier is also expanding its Asian footprint in the above areas – Webasto recently expanded sunroof production in India and Japan. In January 2020, Webasto had also opened a battery centre in Jiaxing, China, as reported. The Chinese plant also produces roof systems.

“South Korea, India and Japan are dynamic growth markets with great potential for both our core business and our electromobility solutions,” explains Dr Holger Engelmann, Chairman of the Management Board of Webasto SE. “As a basic principle, we produce in the market for the market, so given the need for our products in these countries, it quickly became clear that we would strengthen our local presence.” He also called the South Korea plant a “strategically important decision for the future of Webasto”.

The orders being fulfilled in South Korea and Europe in future are Webasto’s first systems for passenger electric vehicles.

Their plant in Schierling, erected in 2019, usually focuses on assembling battery modules for electrified commercial vehicles. The company claims that over 20 customers have now placed orders for said “standard battery system, which combines the price benefits of a scalable mass-market product with the precision fit of a custom solution”. Depending on the configuration, it can be utilized in 400- and 800-volt systems.