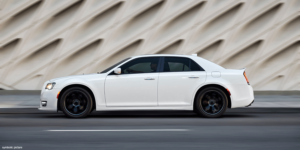 According to a media report, Chrysler is working on an all-electric successor to the Chrysler 300. The first key data on the large electric sedan have also been mentioned – but neither the model itself nor the technical data have been confirmed at present.

As the Australian portal Drive learned from insiders, this electric sedan will use 800-volt technology based on the STLA Large platform of the parent company Stellantis from 2026, just like the series version of the Chrysler Airflow Concept presented at the beginning of this year.

At the “EV Day” almost exactly one year ago, Stellantis had announced that the STLA Large is one of four planned electric platforms for the multinational multi-brand group. The STLA Large is designed for batteries from 101 to 118 kWh. The vehicles are to be between 4.70 and 5.40 metres long and between 1.90 and 2.03 metres wide. At the time, it was said that eight models based on this platform were already in development – including a business sedan, a Dodge muscle car and a family SUV. The business sedan could theoretically be the Chrysler 300.

According to Drive, the 300 will have a range of up to 800 kilometres and use an 800-volt platform. The former would certainly be possible given the battery size. The system voltage of 800 volts would mean that the Chrysler relies on the so-called EDM3 drive unit. The EDM3 is the only one of the three announced electric drive modules that will also be available in an 800-volt version – EDM1 and EDM2 are 400-volt-only units. The EDM3 offers between 150 and 330 kW per engine. However, it is not known how powerful the Chrysler 300 will really be and whether it will optionally be offered with a second electric motor for an all-wheel drive.

According to the article, the development of the Chrysler model is to be linked to a four-door model from Dodge – such a parallel development of two E-limousines for different brands would make sense. However, it remains to be seen on which markets the models will be offered. In the past, the Chrysler 300C was also sold in Europe, but in the second generation from 2011, only the sister model Lancia Thema was sold here.