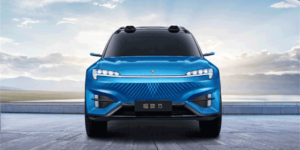 Evergrande New Energy Vehicle, the electric car division of the Chinese real estate group Evergrande, has started pre-sales of its first model in China. The price has now also been fixed. The Hengchi 5 is available from 179,000 yuan, the equivalent of about 26,150 euros.

The electric SUV is thus significantly cheaper than the Tesla Model Y (316,900 yuan) and the Nio EC6 (396,000 yuan), but slightly more expensive than the Xpeng G3 (168,900 yuan). Deliveries of the Hengchi 5 are scheduled to start in October 2022 and Evergrande NEV aims to complete the first 10,000 vehicles by the first quarter of 2023. Production has been underway since January, but it is not known how many vehicles Evergrande Auto has already pre-produced.

Interested parties are to be able to place a reservation immediately for a refundable fee of 1,000 yuan (146 euros). From 1 August, pre-orders are to be possible for a deposit of 10,000 yuan.

The Hengchi 5 is equipped with a 150 kW permanent magnet synchronous motor from Bosch and a CATL battery with cell-to-pack technology and LFP chemistry, which offers a capacity of 72.8 kWh. The range according to Chinese standards is given as 602 kilometres.

Previously, a price of around 200,000 yuan was in the air, so the company has priced the Hengchi 5 slightly lower. At the event, the president of Evergrande Auto, Liu Yongzhuo, stressed that the model is the best electric SUV below 300,000 yuan. However, even Chinese media express doubts as to whether consumers will buy the vehicle despite the supposedly low price – in view of the debt crisis at the parent company, the future of the carmaker seems too uncertain for many potential customers. Only the sales figures in a few months will bring clarity.

Maruti Suzuki to release electric car in India in 2025