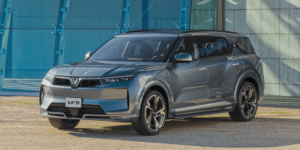 Vietnamese electric car manufacturer VinFast will open its first six U.S. showrooms in California this week, with plans for 30 locations throughout the state by the end of the year.

This marks the beginning of VinFasts marketing for the US American market. To start, six locations were chosen in Santa Monica, San Diego, San Mateo, Corte Madera, Commerce, and Berkeley, with more to follow, as mentioned above. To start, VinFast will be importing vehicles from Asia, plans are for the Vietnamese startups US American factory in North Carolina to start producing in around 18 months.

Amazingly enough, VinFast already has customers in the United States, as Artemis DNA, a biotech company, reserved 100 of their EVs after the CES, with delivery planned late this year. In Europe, VinFast is also ramping up sales, and recently announced plans for stores in Germany, France and the Netherlands.

3 Kommentare zu “VinFast is opening showrooms in the USA”