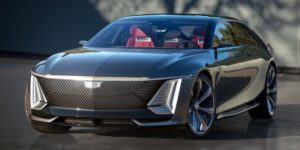 Cadillac has presented a new concept called Celestiq and considers the show car a preview of the upcoming all-electric flagship sedan. The GM brand is working towards production readiness of the luxury model, which will utilise GM’s Ultium platform .

The show car previews some of the materials, innovative technologies and craftsmanship details that express Cadillac’s vision for the future, as the company now announced. These include five interactive LED displays, as well as a Smart Glass Roof with variable light transmission and Ultra Cruise, General Motors’ next-generation autonomous driving assistance system.

“The CELESTIQ show car is the purest expression of Cadillac,” said Magalie Debellis, Manager, Cadillac Advanced Design. “It brings to life the most integrated expressions of design and innovation in the brand’s history, coalescing in a defining statement of a true Cadillac flagship.”

The Celestiq is to be hand-built in Warren in the US state of Michigan at the company’s factory. GM is investing $81 million in its Global Technical Centre there to prepare the campus for building the Cadillac Celestiq. The Celestiq will be the first production vehicle built there since the centre’s inauguration in May 1956.

“Those vehicles represented the pinnacle of luxury in their respective eras, and helped make Cadillac the standard of the world,” said Tony Roma, chief engineer. “The CELESTIQ show car — also a sedan, because the configuration offers the very best luxury experience — builds on that pedigree and captures the spirt of arrival they expressed.”