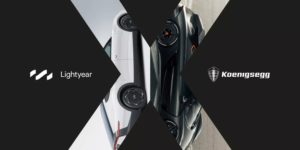 The Dutch solar car company Lightyear has entered into a development cooperation with the Swedish manufacturer Koenigsegg. The technologies of the company, known for its extremely powerful sports cars, are to be incorporated into the mass-market model Lightyear 2.

Although Koenigsegg’s hypercars are at most hybrids and so far not pure battery-electric sports cars, Koenigsegg “also has a long history of developing sustainable mobility technologies”, Lightyear said.

Exactly what technologies and components Koenigsegg will contribute is not clear from the announcement. At the beginning of the year, the Swedish company had presented a self-developed electric motor with “Radial-Flux-Technology”, which is supposed to achieve an output of 250 kW and a torque of 600 Nm at a weight of only 30 kilograms. The “radial-flux technology” is a mixture of axial-flux and radial-flux motor.

However, it is rather unlikely whether it is specifically this drive system: Koenigsegg developed the electric drive for its million-dollar Gemera sports car. The Lightyear 2, however, is to be available as a mass-market model at prices starting at 30,000 euros. Production is reportedly scheduled to start in 2024 or 2025.

“Koenigsegg is top of the food chain in the field of high-performance sports cars,” says Lex Hoefsloot, CEO and co-founder of Lightyear. “I’ve always admired their blend of incredible performance, design, and sustainable technology – this partnership shows we are clearly on the right track.”

Christian vom Koenigsegg, CEO and founder of Koenigsegg, says: “The automotive industry is going through a massive transition to sustainable fuel and technology. Lex and his team have developed transformative technologies, and this partnership with Lightyear will ensure our products remain on the bleeding edge, which is great news for our customers.”