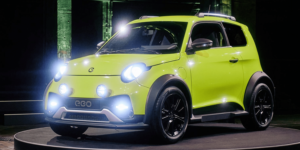 Aachen-based electric car manufacturer Next.e.GO Mobile has agreed a business combination with the SPAC Athena Consumer Acquisition. The merged company is to be listed on the New York Stock Exchange.

The company attaches to the transaction the expectation of gross proceeds of up to approximately US$285 million – consisting of up to approximately US$235 million from the Athena Consumer Acquisition escrow account and up to US$50 million in planned debt financing. The money is planned to fund operations and growth, according to a statement from Next.e.Go. The enterprise value of the combined company is reportedly estimated at $913 million.

The deal, which is subject to customary closing conditions, was unanimously approved by the boards of directors of the two companies, according to the release. The board of directors of the combined company is to be composed of representatives from Next.e.GO and Athena and will be chaired by Ali Vezvaei.

Ali Vezvaei, CEO of e.GO, believes the company is well positioned in the face of growing global demands for the decarbonisation of urban mobility. “The partnership we announced with Athena today is a remarkable milestone in e.GO’s journey,” he said. “This Transaction will allow us to accelerate our growth, expand our global reach, and continue our track record of disruptive innovation.”

It has been known since at least the beginning of the year that Next.e.GO Mobile is looking to go public. Even then, financial circles speculated about a SPAC deal, but a normal IPO was also being considered.

It is important to note that e.GO Mobile AG filed for insolvency in self-administration at the beginning of April 2020. The company had already had financial problems and had not found any further investors – the existing investors had to inject additional funds. When the Corona pandemic affected sales and supply chains, the insolvency application followed. With effect from 1 September 2020, ND Industrial took over the company, all subsidiaries and the employees.

Under the new ownership, the company resumed production of the Life small electric car in early July 2021, after the manufacturer began selling the special edition e.GO Life Next in Germany in June.

In 2018, e.GO established its first MicroFactory in Aachen, Germany, and developed its battery electric vehicle platform. To date, the company has put more than 1,000 of its vehicles on the road, according to a recent announcement. Construction of a second MicroFactory in Southeast Europe is expected to begin this year. Each MicroFactory is capable of producing about 30,000 cars per year in three-shift operation, it adds.