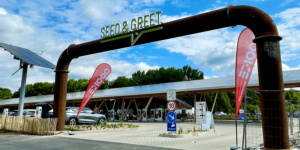 A special attraction will be inaugurated tomorrow at the Roland Schüren Seed&Greet charging park in Hilden, Germany. A Tesla swimming pool will open at the pit stop for personal cooling during the charging break.

Instructions were posted by Tesla that indicate that up to 4 people can use the pool at the same time for up to 10 minutes. It will be open from Thursday through Sunday from 2:00 p.m. to 7:00 p.m. Whether this will go serial is another question entirely, but it would not be the first eccentric product the Tesla CEO launches.

Toyota threatens to pull out of the UK over combustion limits