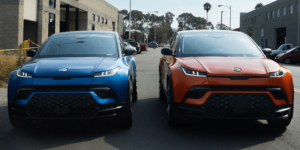 Contract manufacturer Magna has completed the first 55 prototypes of the Fisker Ocean, which will now undergo various final tests before series production of the electric SUV is scheduled to begin at Magna in Graz on 17 November 2022.

Fisker also announced in its latest annual report that the introductory edition called Fisker Ocean One (the first 5,000 vehicles to be manufactured) is now completely sold out. The 5,000 pre-orderers of the Ocean One have already made deposits of US$5,000 each.

“The quality of the prototype still needs to be improved before we go into mass production, as some parts are early prototype parts, but this gives us the time to refine more,” says CEO Henrik Fisker. However, the company founder is very happy with the functions and features: “After driving test cars on a high-speed track in Italy and on the streets of L.A., I’m excited about all the features we’ll offer in the Fisker Ocean and how great it will be to drive.”

According to Henrik Fisker, all pre-orders for the Ocean One come from nine countries: Austria, Canada, Denmark, France, Germany, Norway, Sweden, the United Kingdom and the United States. It is a “historic moment” for the company, as “thousands of customers have paid $5,000 for a vehicle that many have only seen in pictures”, Fisker added. Fisker first displayed the vehicle in Europe at the Mobile World Congress in Barcelona at the end of February.

In total, the number of reservations for the Fisker Ocean beyond the special model amounted to more than 56,000 units as of 1 August 2022. Fisker will open pre-orders for the Ocean Extreme variant from 18 November, the day after production of the Ocean starts in Graz, followed by the Ultra and Sport trims in the first quarter of 2023.

In the report, the company also gives an update on the upcoming Pear compact model: the vehicle will be based on the Fisker-developed SLV1 electric vehicle platform – but Fisker is not yet giving details. Foxconn has, however, completed the purchase of the former Lordstown plant in Ohio. The Pear is to be built there from 2024 – after the ramp-up, 250,000 units per year are planned.