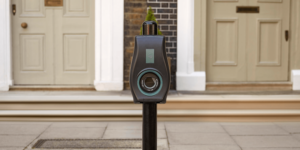 Connected Kerb has been selected to deliver on-street charge points across New York City in what the company calls a “groundbreaking flagship project”. Provided for the New York City Department of Transportation (NYC DOT) and Newlab, the pilot could lead to 10,000 curbside chargers across NYC by 2030.

For now, however, the NYC DOT wants Connected Kerb to demonstrate that public access to charge points can increase EV ownership among the 50 per cent of residents that park their cars on the streets of New York. It is the company’s first project in the United States, and they compete or work alongside Char.gy and Voltpost in the project.

While details on the number, type of chargers or contract value remain scarce, Connected Kerb says it will receive funding to install its EV charging points. The company has started sighting the Brooklyn Navy Yard to deliver a ‘living lab’ that will demonstrate smart city infrastructure.

Connected was selected for the project in June and claims the flexibility of its charger infrastructure, which is often integrated into street furniture, and the capability to incorporate smart technologies, such as 5G, IoT (Internet of Things) and air quality sensors as reasons for the selection.

Pilot planning and design are underway now, to launch by autumn 2022.

The findings will inform broader EV charging rollouts across New York City, helping the city to reach its goal of installing 10,000 curbside chargers by 2030 and electrifying 20% of municipal parking bays by 2025, so the statement.

Today’s news comes after New York Governor Kathy Hochul approved a bill to continue the EV Make-Ready scheme launched by her predecessor Andrew Cuomo in 2020. The programme banks on public-private partnerships with utilities and charging equipment manufacturers expected to help install 50,000 AC and 1,500 DC charging stations in the US state by 2025 through a cost-sharing programme.

As for New York City, the administration brought its fleet electrification and charging infrastructure forward five years from 2035 to 2030, as reported in December last year.

Steve Richardson, Co-Founder of Connected Kerb, added, “There are around two million light-duty vehicles in New York City, accounting for 80% of transport emissions. New York City DOT has established ambitious goals to eliminate these emissions by boosting electric vehicle adoption, and The DOT Studio project will provide a crucial blueprint for how to deliver world-leading charging infrastructure to support that goal.”

The British company’s portfolio comprises four products. The Gecko charger can be attached to existing parking posts or bollards and is connected to an underground unit that monitors and controls the flow of electricity and data. This appears to be the most likely option for the project in NYC.

Connected Kerb also offers 7 kW chargers, the Limped and the Armadillo. The former is a wall box for mounting only on existing walls, while the latter is the company’s debut model, advertised as a kerbside charger and made from recycled material.

In May, they also launched the Chameleon unit. It looks like a bollard and does not require planning permission, at least not in the UK.

Connected Kerb entered their home market in early 2019 with the first chargers installed in London, mounted on the kerb, on traffic sign poles or bollards at the side of the road. The company now claims charge points at around 300 locations in Great Britain.

In New York City, Connected Kerb has selected Charge Infrastructure as its preferred installation provider for this Newlab project.