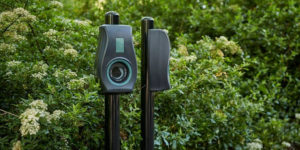 The British charging infrastructure company Connected Kerb has said it will install a total of 190,000 publicly accessible AC chargers in the UK by 2030. The company specialises in standard chargers with 7 to 22 kW for overnight street parking.

The public chargers will require overall investments of up to 1.9 billion pounds (2.22 billion euros). The UK government’s Office for Zero-Emission Vehicles is covering the cost of 75 per cent of the charge points as part of the On-Street Residential Charging Scheme (ORCS). Connected Kerb has said it will cover the remaining 25 per cent, enabling some local authorities to install free of charge.

Connected Kerb CEO Chris Pateman-Jones says: “Targets are important – for an industry so critical to the decarbonisation of transport, we need goals to work towards and objectives to which we are all accountable. However, they need to be met with action. With deals confirmed for 10,000 chargers this year alone and 30,000 more expected next year, we are demonstrating that we’re getting on with the job and delivering the change that needs to happen – not just talking about it.”

Connected Kerb only first became really visible in early 2019 with the first chargers in London, mounted on the kerb, on traffic sign poles or on boundary bollards at the side of the road. The company based in the UK capital says it now has around 1,000 public charging stations in operation. Starting with, as mentioned by Pateman-Jones above, contracts a further 10,000 chargers in 2021 alone, as well as agreements for 30,000 more chargers in the pipeline, the manufacturer wants to install no less than 190,000 publicly accessible chargers in the UK by 2030.

The 10,000 new public charging points contracted later this year will be built primarily in West Sussex and Kent. The final distribution for the curbside charging stations has not been decided as of yet, however, the company has said these contracts have a term of 15 to 25 years. After winning a public tender, the company will install the majority of the charging stations on roads, public car parks and community facilities in West Sussex by 2030. At least 600 will also be in operation in the county of Kent by 2023. In addition, there are agreements with Coventry (300 charging stations), Cambridge (360), Plymouth (100), Milton Keynes (250), Warrington (30) and Medway (30), among others.

By the end of 2022, Connected Kerb aims to have 5,500 charging stations in operation across the UK. The British company now has  three products with 7 to 22 kW in its portfolio. These include the Gecko charger, which can be attached to existing parking posts or bollards and is connected to an underground unit that monitors and controls the flow of electricity and data. Connected Kerb says that this charger is ideal for residential areas where it blends discreetly into the existing streetscape.

The company also offers two 7 kW chargers, the Limped and the Armadillo. The former is a wallbox for mounting only on existing walls, while the latter is the British company’s debut model, advertised as a kerbside charger and made from recycled material.

With this approach, Connected Kerb is pursuing a similar concept to Shell’s German subsidiary Ubritricity, which is also mainly active with its roadside chargers mainly in the UK. At the beginning of this year, Shell announced that it will be installing more than 50,000 Ubitricity charging stations in the British Isles by 2025. Here, too, public support from the ORCS programme will be utilised. Between 2017 and mid-2021, the government said it had funded the installation of 1,459 public charging points through this programme, with subsidies for a further 3,200 charging points to follow in the near future.

With its pledge to ban the sale of new diesel and petrol cars from 2030, the UK government estimates the country will need around 400,000 EV charging points by that date. Pateman-Jones said Connected Kerb believes demand will actually be much higher.