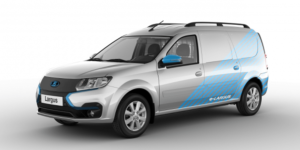 The Russian Lada manufacturer Avtovaz is planning its first electric model – but don’t expect to see the electric Lada before 2024. That is at the earliest, if at all: after the sanctions imposed on Russia due to its invasion of Ukraine and the withdrawal of Renault, Avtovaz is having great difficulty keeping car production going.

AvtoVAZ has been experiencing huge difficulties producing and delivering new cars since the conflict began and is struggling with the embargo. Just recently, the firm restarted production of the Granta, however, without ABS, airbags, and other features. For its new project, Lada is eyeing a technology it has virtually zero experience with, so it will be an uphill battle for the company.

Especially Renault leaving will spell out some problems for the company, as the electric Lada is based on the Dacia Logan LCV. This vehicle rides on Renault-Dacia’s B0 platform, which was launched in 2004, and is based on an internal combustion engine, further cutting down on EV efficiency.
carscoops.com, motor1.com

The most unnecessary electric scooter ever?