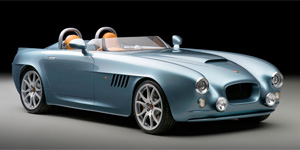 EV incentives in Germany? The German government is working on a 2bn euro programme designed to spur electric transport in the heart of Europe. The scheme draws on public infrastructure, but also includes incentives, which had been ruled out before. Government officials themselves might also be asked to drive electrically, but no details have been published yet.
zeit.de, automobilwoche.de (articles in German)

E-Pace update: It looks like the electric Jaguar E-Pace will arrive already in 2018, auto motor & sport reports. A plug-in hybrid version is also in the cards. The E-Pace will be similar to the F-Pace, but a little more compact. Technology is lent from the Concept E by Land Rover (we reported).
auto-motor-und-sport.de (in German)

Kia teases its dedicated hybrid ahead of the Chicago debut, publishing images of the Niro’s glossy outlines. The dedicated PHEV will most likely share its system with Hyundai’s Ioniq that combines a four-cylinder with an electric motor for a combined output of 150 hp.
worldcarfans.com, autocar.co.uk

Lada EV: The Russian brand is working on an electric version of the Vesta sedan. AvtoVaz, better known as Lada, already has one EV called the E1, which is produced in very small numbers. The Vesta EV is currently being tested and features a 60 kW motor and lithium-ion battery.
automobil-produktion.de (in German)

Outlander goes west: In Detroit, Mitsubishi gave a sneak preview of its latest Outlander PHEV that is scheduled to finally arrive in the U.S. in August. It had been delayed multiple times, but the plug-in hybrid will make its official debut in New York this spring.
autonews.com, thedetroitbureau.com

Taking flight: Two senior Tesla engineers have joined drone start-up Skydio. Dan Adams joined Tesla as a Senior Mechanical Engineer and stayed with the EV maker for ten years. He now followed his colleague Benjamin Thompson, said to be responsible for many of the Autopilot features.
electrek.co

Power comes at a price.

This video shows an old Lada easily overtaking a Porsche 911. While the speed and dedication is truly impressive, the sound of whatever it is that powers the Lada roars rather unpleasantly. Maybe the Porsche driver wanted to be taken over and be left in peace and quiet?!
youtube.com

Some Russian government employees might have been reminded of times not so long ago, when Industry Minister Denis Manturov handed in a draft to limit the procurement of imported cars by state institutions. His proposal is meant to support the domestic car industry and the state’s pocket in the face of a falling rouble. So from now on it is bye-bye Benz and ‘Privét’ Lada!
uk.reuters.com