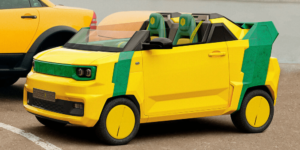 Last year we reported that the Mini EV, an extremely popular electric car from General Motors’ partner Wuling in China, was being brought to Europe as the FreZe Nikrob EV by Latvian company Dartz Motorz. The Mini EV is now to come to Europe as a convertible called FreZe Froggy EV.

The Froggy is effectively a re-bodied version of Chinese company Wuling’s Hongguang Mini EV Cabrio and is expected to be offered with a 27bhp electric motor enabling a top speed of 62mph. This compares nicely with similar vehicles, such as the Citroën Ami’s 28mph top speed. The range is described as 105 miles, however, the original allows for some battery flexibility, which may allow for higher ranges. An official range figure has not been set.

Prices have not been specified yet, however, according to Autocar, it is “expected to be significantly costlier than the €13,000 (£10,986) Nikrob”.
moveelectric.com, autocar.co.uk

The most unnecessary electric scooter ever?