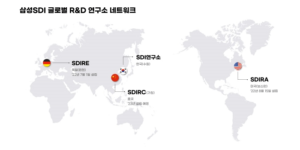 The South Korean battery cell manufacturer Samsung SDI is expanding its research and development (R&D) activities for new battery technologies. New locations this year are being founded in the USA and Germany with a further centre planned in China next year.

The new R&D centre in Boston called SDI R&D America (SDIRA) is Samsung SDI’s first R&D centre in the US. Here, Samsung aims to work with “outstanding local universities and start-ups” that “excel in innovative battery technology and research and development of next-generation batteries”.

On 1 July this year, Samsung SDI also established the R&D centre called SDI R&D Europe (SDIRE) based in Munich. Although a research focus has not yet been revealed for the Munich location, the company says in general that it is “establishing overseas R&D centres to secure super-gap technology competitiveness via region-specific research and development of new battery technology.”

Samsung SDI is also planning to set up an R&D centre in China in 2023. In China, the company says that it has access to “the largest number of universities, research institutes and companies in the field of batteries.”

The South Korean battery maker says it is aiming to lead in battery technology by “spending the industry-leading R&D expenditure.” Samsung SDI showed in its business report released in March that last year’s R&D expenditure recorded 877 billion KRW (around 658 billion euros), which is the highest research and development expinditure ever made by the company.

According to the latest half-year evaluation by Korean market research firm SNE Research, Samsung SDI was the world’s fifth-largest EV battery manufacturer with 13.2 GWh in H1 2022. Compared to H1 2021, Samsung SDI increased capacity by 114.4 per cent, taking its market share from 5.3 to 6.5 per cent.

BYD announces plans for lithium mine and battery production in Yichun

Loop Energy is setting up a factory in the UK