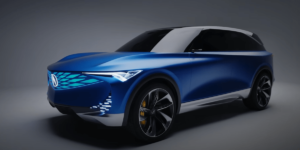 Honda’s Acura subsidiary brand announces its first all-electric model. The electric SUV will be called Acura ZDX and is scheduled for market launch in 2024. Acura provides a preview of the electric vehicle in the form of the Precision EV Concept.

Like the Honda Prologue, the Acura ZDX will use the Ultium platform from General Motors. From 2026 onwards, the premium brand plans to launch further electric models based on Honda’s own e:Architecture platform.

As mentioned, the Precision EV Concept is meant to give a preview of Acura’s first electric car. The concept car celebrated its debut at the Monterey Car Week. However, it is initially only a design concept. Accordingly, the press release is only dedicated to the design of the vehicle.

There are no technical details yet. Only that the purely electric SUV will use the Ultium platform from General Motors. However, the Acura ZDX will also be launched as the ZDX Type S. Thus, two variants are apparently planned – a more conventional and a more performance-oriented version.

Honda’s plans for electric cars with GM technology already became concrete in January last year. At that time it became known that GM would build one battery-electric crossover model each for the Honda and Acura brands with its Ultium batteries. Honda’s first all-electric model based on General Motors’ Ultium platform for North America will be called Prologue and will be launched in early 2024. In the same year, as already mentioned, an electric model based on Ultium will also follow from Acura.

A little over a year ago, Honda’s global CEO Toshihiro Mibe announced a tougher electric course for the manufacturer at a press conference. Honda will increase the share of battery-electric and fuel cell cars in its sales in North America and China to 40 per cent by 2030, 80 per cent by 2035 and 100 per cent globally by 2040, he said. Honda is banking on three new all-electric vehicle platforms in its plan to achieve sales volumes of more than two million electric cars per year by 2030.

Tesla cuts down on delivery times in China