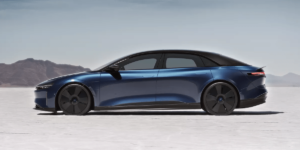 The US electric car manufacturer Lucid Motors has introduced its new performance subsidiary brand Sapphire. It will debut with a three-motor version of the Air electric sedan, which is expected to rival the Tesla Model S Plaid.

The Lucid Air Sapphire has two electric drives on the rear axle and another one in the front, which together should bring it to over 895 kW of power. The company will only announce the final output later. The Model S Plaid, which the Lucid Air Sapphire is obviously aimed at, has an output of 750 kW with its three motors.

The acceleration of the Sapphire variant is claimed by Lucid to be less than two seconds from standstill to 60 mph (96 km/h) and less than four seconds from zero to 100 mph (161 km/h). The Lucid Air Sapphire is said to do the quarter mile in less than nine seconds. The top speed is over 200 mph (322 km/h).

As Eric Bach, Senior Vice President of Product and Chief Engineer at Lucid, states in the press release, the drive with three electric drives was part of the development programme from the beginning, which is why no compromises had to be made in the production model in order to place the two e-motors in the available installation space on the rear axle. The Sapphire is therefore intended to retain “all the strengths of the Lucid Air variants already on the market”. As examples, Bach mentions the legroom in the rear, the large boot and the “impressive efficiency”. However, Lucid does not yet provide information on range and consumption.

On the other hand, there are some details about the drive units on the rear axle developed by Lucid itself. For example, the electric drives have “microjet stator cooling”. The dual motor also uses a new heat exchanger technology, and the coolant flow rate has also been increased. The battery system is also adapted to the higher performance, especially in the more precise “thermal logic”, i.e. temperature control. Unsurprisingly, cooling is an important factor in such a powerful e-drive.

Production of the Lucid Air Sapphire is scheduled to begin in the first half of 2023. Initially, a limited series is planned for the USA and Canada at prices of 249,000 US dollars and 325,000 Canadian dollars respectively. Lucid also plans to offer Sapphire offshoots for future models. This means that the Gravity e-SUV, which is planned as the second series model, will probably also receive such a performance version.

Fisker looks to expand production of the ‘Ocean’