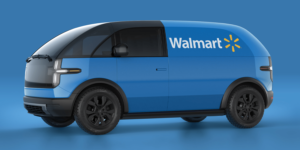 The US retail giant had signed a binding agreement with Canoo to buy 4,500 all-electric vans, starting with the Lifestyle Delivery Vehicle (LDV) in July as reported, and holds an option for over 10,000 vans, later filings revealed.

However, Canoo expects production of the LDV delivery vehicles to begin in the fourth quarter of 2022, so final testing is progressing in Dallas.

Tony Aquila, Investor, Chairman & CEO at Canoo, said, “Our LDV has been engineered to enable a wide range of package deliveries, including refrigerated items, groceries and general merchandise,” when commenting on the trials in Dallas. “And we have been turning a lot of heads in the neighborhoods when driving by in our uniquely identifiable vehicles.”

Indeed, the Canoo is unusual, and the following posts show it in complete Walmart branding.

And also in action:

We also know that the Canoo LDV has a customised cargo area with a load volume of up to 120 cubic feet, equivalent to 3.4 cubic metres. This makes the Canoo van significantly smaller than the BrightDrop vans Walmart reportedly also has on order: the EV410 has an 11.3 cubic metre load space, the EV600 up to 17 cubic metres.

And there is another difference between GM’s electric van brand and Canoo. Walmart is essentially Canoo’s launch customer and a lifeline: The company is heavily in debt and, as reported, had questioned its future this May. The company was founded as Evelocity to offer subscription electric cars and to license its skateboarding platform to other carmakers. Following the arrival of Tony Aquila as investor and chairman, the company has refocused its strategy and now aims to sell its vehicles – without platform licences.

Most recently, there were rumours that Canoo could be a takeover candidate. This, however, has become more unlikely to happen. Notification to the US Securities and Exchange Commission (SEC) has revealed that Walmart could exercise an option on about 61 million Canoo shares at a unit price of US$2.15, giving it about a quarter stake in the company. Canoo also had to agree not to sell any vehicles to Walmart-rival Amazon for the duration of the delivery deal, nor is it to allow itself to be taken over by the online giant. In fact, Canoo must refrain from any business whatsoever with Amazon or any of its subsidiaries.