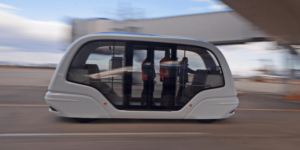 Automotive supplier ZF is looking to sell off parts of its prestige project ‘People Mover’ and electric axle business. At least for the axle division, ZF has confirmed that a sale of shares is under consideration.

According to a report in the German publication Manager Magazin, ZF CEO Wolf-Henning Scheider, who is leaving at the end of the year, has put the People Mover autonomous electric minibus, which was announced with great ambition in 2018, up for sale and is looking for buyers.

The magazine is already putting the People Mover in line with VW’s one-litre concept car, Mercedes’ fuel cell B-Class and Deutsche Post’s StreetScooter, all of which were announced as prestige projects, but then never really took off. Instead of the series start announced for 2019, the ZF People Mover is currently only being used by Transdev in Rotterdam – but in single-digit numbers. In 2018, Scheider had announced the sale of one million autonomous buses in the next five to seven years.

ZF withdrew from the e.Go Moove joint venture founded in 2018 together with e.Go Mobile AG at the end of 2020; e.Go Moove was supposed to build the autonomous vehicles for passenger and freight transport in Aachen. Since then, ZF has continued to develop the project on its own. However, the company has not confirmed the alleged plans to sell the former prestige project.

According to Manager Magazin, ZF has partially confirmed the plans with regard to the axle business. In order to exploit the “full potential”, a sale of shares is conceivable. According to the report, a spin-off is also being discussed as part of the review of the axle business. Whether ZF will divest itself of shares or the entire division is therefore not yet clear.

The supplier offers axles for passenger cars and commercial vehicles such as buses – including special components for electric vehicles with integrated electric motors. But according to the report, further development is expensive, and other carmakers have set up their own projects. One example is Mercedes, who bought large parts of the drive system for the EQC from ZF. In the meantime, however, the Stuttgart-based company is pushing for its own production.

In terms of sales, ZF Friedrichshafen is the fourth-largest automotive supplier in the world. However, the company, which is primarily known for its transmissions, is facing significant challenges in the transformation to electromobility and autonomous driving.