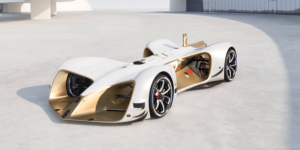 Roborace will be the world’s first racing series for autonomous electric vehicles. The electric racing vehicles are controlled by an AI and are operated without a driver in the vehicle.

Originally announced as a global framework series for Formula E, Roborace has instead become a racing series in its own right. The British company Kinetik is behind the concept.

New features of the Roborace now include the integration of what the race organisers are calling the Roborace Metaverse. This is supposed to be a mixed reality that blends the virtual and physical worlds for teams and fans alike. Organisers are planning twelve races that will be hosted over six events that will be covered via Livestream rather than live at the track for safety reasons.

Flashing through 14 European countries in under 24 hours