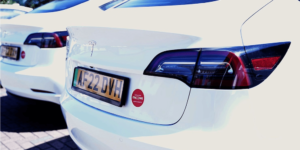 Moove, an African-born fintech start-up, has struck a deal with Uber in London. Moove will provide Uber drivers with electric vehicles through its latest rent-to-buy model. Moove aims to be the largest EV partner on Uber’s platform in London, with plans to scale to 10,000 cars by the end of 2025.

There are 6,000 EVs available on Uber in London, more than in any other cities the company is active in. This is due to the British capital having one of the world’s strictest and most expensive low-emission zones – and it is widening.

So, Uber is working towards becoming a “100% electric platform in London by 2025,” says Andrew Brem, General Manager at Uber UK. The company had asked London drivers already in 2017, to look into hybrid, if not all-electric cars. Back then, drivers would receive up to 5,000 pounds and money if they scrapped their diesel. “We understand that drivers need access to financing if they want to make the transition to an electric vehicle,” added Brem.

Electric cars remain expensive for so-called gig workers, and this is where Moove comes in. Founded in Nigeria in 2020, they expect their service to help put 10,000 EVs on London’s roads by renting out electric cars to Uber drivers for a weekly flat rate. The company also claims an easy sign-up process since it requires no credit checks, upfront costs, or deposits. Instead, Moove uses an “alternative credit scoring technology” and says this provides access to vehicle financing to gig workers who may have previously been excluded from financial services.

They will also launch Moove Charge, an EV charging app specifically for Uber drivers, giving them access to 6,600 charge points. It is unclear who Moove is working with on this.

The new partnership with Uber aligns Moove with Uber’s Clean Air Plan and Moove says its product offering was unmatched by any other company partnered with Uber.

Over the past two years, Moove customers have completed over seven million trips in Moove-financed vehicles in nine markets across sub-Saharan Africa and India.