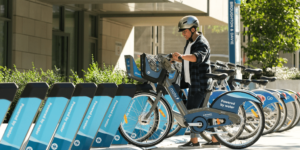 The public bike-share system Mobi by Shaw Go in Vancouver boosts its service by adding 500 e-bikes for the first time. The new pedelecs will charge at 30 e-bike stations and bring the Mobi fleet to 2,500 bikes and 250 stations.

The electric-assist bikes have three support modes and a top speed of 25 kph (or 15 mph). Users can find the nearest e-bike on the Mobi by Shaw Go app. Docking an e-bike is no different from docking a regular bike. However, since the e-bike batteries are integrated into the aluminium frame, all charging occurs automatically at the docks.

Mobi launched the new fleet with BC Hydro to supply hydropower to the bike charging stations.

The Vancouver bike sharing presently claims 400,000 users, having made over four million trips since launch. Mia Kohout, the service’s General Manager, said, “ridership usually significantly increases as e-bikes make getting around by bike more accessible to a wider group of people, particularly in a city like ours with lots of hills.”

Mobi by Shaw Go users and members will pay per minute for riding Mobi e-bikes, with fees depending on your membership type. Annual members have access to the lowest e-bike rates, $0.15 per minute, and will still have unlimited 30 or 60-minute trips on classic bikes at no extra cost. The service has also introduced a Pay-As-You-Go plan where users can unlock an e-bike for $1.50 and pay $0.35 per minute to ride, and classic bikes can be unlocked for $1 and pay $0.25 per minute to ride.

The most up-to-date information can be found in the Mobi app.

The 500 e-bikes follow a soft launch that had received an “overwhelming response,” said Mobi.